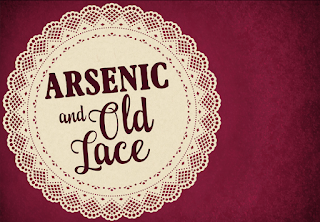 Mortimer Brewster is living a happy life: he has a steady job at a prominent New York newspaper, he’s just become engaged, and he gets to visit his sweet spinster aunts to announce the engagement. Mortimer always knew that his family had a bit of a mad gene -- his brother believes himself to be Teddy Roosevelt and his great-grandfather used to scalp Indians for pleasure -- but his world is turned upside down when he realizes that his dear aunts have been poisoning lonely old men for years! When Mortimer’s maniacal brother, Jonathan. (who strangely now resembles Boris Karloff) returns on the night that the aunts were planning to bury the newest victim, Mortimer must rally to help his aunts and protect his fiancé -- all while trying to keep his own sanity. as well. An uproarious farce on plays involving murder, Arsenic and Old Lace has become a favorite amongst regional theatres throughout America.

Audition Dates are December 16 & 17th at 7pm located at the Playhouse.
Casting is for 3w/11m

Hope to see you there!
Posted by Mari Pankratz at 4:24 PM

The Community Players of Hobbs is proud to present its 2020 season!

The Best of Everything
by: Julie Kramer
Directed by: Marirene Vigil
Auditions TBA
Performances will be March 27-28, April 3-5

Beyond the Horizon
by: Eugene O'Neill
Directed by: Ashley & Jonathan Bertschinger
Auditions TBA
Performances will be September 4-13

Thank you to all of the directors that submitted for this 2020 season. A reminder that the 2019 Season Gala will be held on January 4, 2020 at the Lea County Event Center at 6:30. This will also be used as the January Board meeting and is open to the public. Hope to see you there!
Posted by Mari Pankratz at 4:10 PM

Applications for the Playhouse’s Carl Busch Scholarship are now available online. Applications must be submitted no later than 5pm, Sunday, December 15, 2019.

If selected, you will be asked to attend the annual awards banquet held on
Saturday, January 4, 2020. Best of luck!

Applications can be found online in MS Word format:
https://drive.google.com/file/d/1WcbkYo4AEi513fQK_3AIVeCo8L9gyCd7/view?usp=sharing

or PDF:
https://drive.google.com/file/d/1RxkwFrjOEHdhoAP4pVnLAqjyZ_7DV4r6/view?usp=sharing
Posted by Mari Pankratz at 2:37 PM