Congratulations to the cast of Maid To Order! 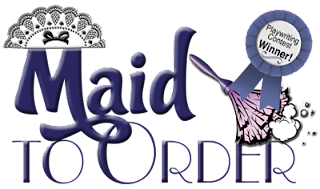 Our first read through will be October 29, 2019 at 7pm located at the Western Heritage Museum & Lea County Cowboy Hall of Fame.

We can't get to get this show started! Congrats!
Posted by Mari Pankratz at 9:36 PM

Here’s a farce at its funny and frenetic best!  A wealthy widow, Marcy Malliger, is expecting her beau for dinner, which means she expects nothing less than perfection from her household staff.  Her disgusting son Gerald, who is 25 years old but still lives with his “mommy,” is attempting to put the moves on the maids, as usual.  Sarah, a recently hired maid, does her best to ignore his overtures so as not to lose her job.  That’s when her brother James shows up, looking for a place to hide.  He’s on the run from a loan shark who wants his money back, and certainly the mobster wouldn’t think to look for him at a mansion.  But wouldn’t you know, Ms. Malliger’s beau who comes for dinner is the loan shark?!  Bring in the cops, who think James is Gerald (and vice versa!), and the loan shark’s dim-witted daughter, who instantly falls head-over-heels for Gerald, and you’ve got all the ingredients for fantastic farce in just one hour!  Mistaken identities galore, a fast paced plot that picks up more speed as it goes and an extended chase scene involving well...  just about everyone, will instantly make this fresh farce a favorite for cast, crew and audience alike!

Performances will be December 12-15 and directed by Lucero Acosta.
Posted by Mari Pankratz at 9:50 AM