Highlights From The Playhouse Gala 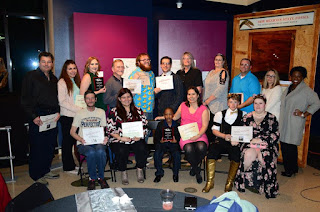 Happy New Year to everyone!
In case you missed it, the annual Playhouse Gala was held at the Western Heritage Museum on Saturday, February 4. We celebrated the 2016 season and outstanding participants, announced the 2017 season and shared some tasty hors d'oeuvres.

If you weren't able to attend, here are a few of the highlights:
~ The 2017 season is as follows:


~ The risers have been repainted and numbered for seating.

~ More progress has been made on the new addition, including painting, light fixtures, doors and air conditioning.

~ The building committee is working on a list of improvement priorities for the property, including the parking lot, the roof, bathrooms and accessibility.

I would like to thank Leigh Melton, Sandra Kelly Goad, Dusty Armstrong, Sarah Bunch, Carey Cleer-Lindner and Claude Jaco for serving on the gala decorating committee and Christie Harkness, Daniel Russell, Reed Armstrong and Robert Schumacher for helping set up.

Special thanks are in order for Erin Anderson, who went out of her way to help troubleshoot and problem-solve all evening, not to mention taking tons of photos! We couldn't have done it without your expertise!

Now that the gala is over, it's an official wrap on 2016, but we have an amazing 2017 season to come! See you all at the Playhouse!