Scrambling for a last minute gift? Give the gift of live entertainment and support your local community at the same time! The gift that keeps on giving throughout the year will make anybody smile. Season tickets make a wonderful gift for friends and family of all ages and can be delivered instantly via email. Community Players of Hobbs 2017 season tickets are available online now! 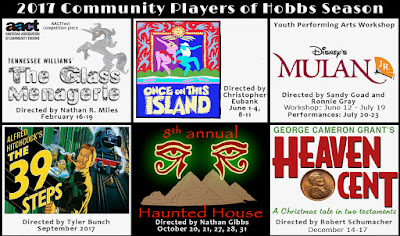 "'Twas the Fight Before Christmas opens this week!!! 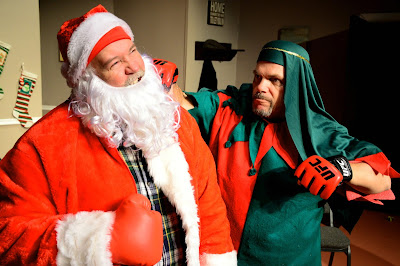 The fight is on!
"'Twas the Fight Before Christmas opens this week!!!

Tickets are just $10, available online http://www.communityplayersofhobbs.com/ and at the door!

Don't miss this hilarious Christmas quarrel and your last chance to use your 2016 Season Tickets!

The Langfords and the Riders have been friends for years. Even their children are playmates. They completely understand and admire each other -- until Mrs. Rider phones the Langford home and leaves a message with Renee, the youngest, who is so engrossed in a video game, she can't be expected to get the message right! She gets both families embroiled in a serious quarrel, and right before Christmas, too! She finally brings to light what actually caused the misunderstanding and tops everything by filling in at the last moment in the church pageant. The role? “Brotherly Love”!

Happy Holidays!
Posted by Shoshana at 10:02 AM

Congratulations to the cast of "The Glass Menagerie" 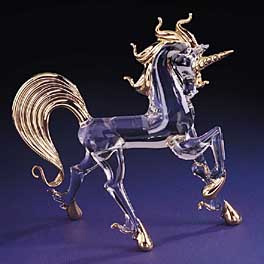 Congratulations to the cast of "The Glass Menagerie"!

Thank you to all who auditioned!

Cast must be off book for Act 1.1 by January 9th.
Posted by Robert Schumacher at 3:53 PM

Applications for the Carl Busch Scholarship

The Playhouse board of directors is pleased to announce that applications for the Playhouse's Carl Busch scholarships are now being accepted. Applications in both fillable and PDF formats are attached.  Information and applications can be found on the Playhouse website sidebar at http://www.communityplayersofhobbs.com/.

Scholarships are due to:

Applications must be received on or before January 6, 2017.  Recipients will be asked to attend the Playhouse Gala on February 4, 2015, at the Western Heritage Museum.

For questions, please reply to this email.  Please also feel free to forward this email to anyone who would be interested in applying. 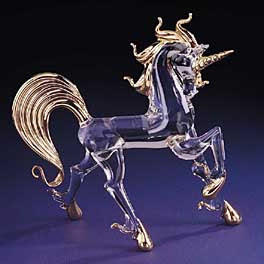 Auditions for "The Glass Menagerie" will be held at the Playhouse on Friday December 9 at
7PM and Saturday December 10 at 2PM.

This will be a competition play and members of Actors Equity Association and Screen Actors Guild‐American Federation of Television and Radio Artists (SAG-AFTRA) are ineligible to audition.

If you are cast you must be able to make all future potential performance dates and this show does travel.

Auditions will consist of cold readings and scene work with the director. 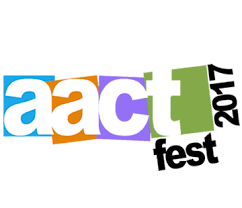 The Playhouse Board of Directors is pleased to announce our 2017 season!

Potential directors submitted several new shows for consideration and we had a difficult time choosing which ones to present, but we have put together the following exciting season for you!

THE GLASS MENAGERIE by Tennessee Williams, a one-act directed by Nathan Miles for AACTFest
February 16-19, 2017
Amanda Wingfield is a faded, tragic remnant of Southern gentility who lives in poverty in a dingy St. Louis apartment with her son, Tom, and her daughter, Laura. Amanda strives to give meaning and direction to her life and the lives of her children, though her methods are ineffective and irritating.   A drama of great tenderness, charm and beauty, The Glass Menagerie is one of the most famous plays of the modern theatre.

THE 39 STEPS by Patrick Barlow and John Buchan, directed by Tyler Bunch
March 31, April 1-2, 7-9, 2017
In The 39 Steps, a man with a boring life meets a woman with a thick accent who says she's a spy. When he takes her home, she is murdered. Soon, a mysterious organization called "The 39 Steps" is hot on the man's trail in a nationwide manhunt that climaxes in a death-defying finale! A riotous blend of virtuoso performances and wildly inventive stagecraft, The 39 Steps amounts to an unforgettable evening of pure pleasure!

ONCE ON THIS ISLAND by Lynn Ahrens and Stephen Flaherty, directed by Christopher Eubank
June 1-4, 8-11, 2017
Once On This Island, an enchanting musical fable, tells the story of forbidden love between people from two different worlds. Originally inspired by Hans Christian Anderson's The Little Mermaid, the Broadway show transports the story to a Caribbean island where social prejudice divides the island. Presented as a 'play within a play', a cast of village storytellers, attempting to calm a frightened young child, tell the romantic tale of a peasant girl who saves a rich city boy from death.

HEAVEN CENT by George Cameron Grant, directed by Robert Schumacher
December 14-17, 2017
Miracles abound on Christmas Eve when the divine intervention of a well-intentioned but hapless angel brings a homeless teen-age girl and a missionary priest to the same place at the same time.

The Board would like to thank all submitting directors for helping us bring another year of quality entertainment to our community!

Your president,
Monica M. Russell
Posted by Robert Schumacher at 9:15 AM