Tickets are on sale for "On Golden Pond" 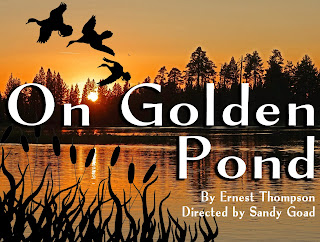 Tickets are now on sale for "On Golden Pond"!

"On Golden Pond" is a 1979 play by Ernest Thompson. The plot focuses on aging couple Ethel and Norman Thayer, who spend each summer at their home on a lake called Golden Pond. During the year the story takes place, they are visited by daughter Chelsea with her fiancé Billy Ray and his son Billy Ray Jr. The play explores the often turbulent relationship the young woman shared with her father growing up, and the difficulties faced by a couple in the twilight years of a long marriage.

Posted by Robert Schumacher at 10:00 AM