Audition notice for "The Jury (aka 12 Angry Men)" 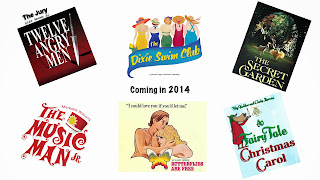 Auditions for the drama "The Jury (aka 12 Angry Men)", directed by Mary Lyle, will be held on Sunday, December 15th and Monday, December 16th at 6:30 PM at the Western Heritage Museum.

There are roles for men and women between the ages of 18-75.  Auditions will consist of cold readings from the script.

"12 Angry Men" is a drama depicting a jury forced to consider a homicide trial. At the outset they are nearly unanimous in a guilty verdict, with a single dissenter voting not guilty.  Throughout the play he sows the seeds of reasonable doubt, forcing the other jurors to consider preconceptions and biases.

Adapted from an Emmy Award-winning teleplay, "12 Angry Men" was made into a movie in 1957 and was nominated for "Best Picture" at the Oscars and "Best Actor" (Henry Fonda) at the Golden Globe Awards.  The stage play was nominated for the 2005 Tony Award for Best Revival of a Play and awarded the 2005 Drama Desk Award for Best Revival of a Play.
Posted by Robert Schumacher at 11:55 AM