What are those kids up to? You'll find out in July when "Aladdin, Jr." opens at the Hobbs Community Playhouse!
Posted by Robert Schumacher at 5:42 AM

Auditions for "Line", a one-act play by Israel Horov

itz and directed by Jonathan Bertschinger (most recently "Officer Lockstock" in "Urinetown - The Musical"), will be coming up in the near future. For those who would like to prepare, Jonathan has prepared monologues from the show for each character. The show consists of four men (Steven, Arnall, Dolan, and Fleming) and one woman (Molly). The monologues can be found by clicking here. There is a permanent link in the left sidebar.

"Line" will be performed later in the year.

"Line" is a 1967 one-act play by Israel Horovitz, his first play produced, an absurdist drama about 5 people waiting in line for an event.  Each of the characters uses their wiles in an attempt to be first in line, getting more and more vicious as the play continues.

(The) Prince Formerly Known as the Artist ~ Andres Labastida

Video courtesy of Shoshana Howell.
Posted by Robert Schumacher at 10:04 AM

Remember...if you don't want to return to the Stink Years, then vote Fipp in 2012! 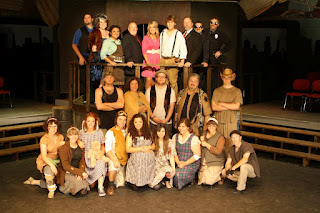 
Get your tickets now by clicking here.  Support your favorite cast member by putting their name in the "Special Instructions" when purchasing your tickets! (See the graphic below for further information.)

"Urinetown" is directed by Juston Harlin, whose previous directing credits at the Playhouse include "Beauty and the Beast" and "I Love You, You're Perfect, Now Change".  Choregraphy is by Karen Salb of Maciolek School of Dance, with Musical Direction by Abby Holmes.

"Urinetown" has a cast of amazing local talent, including:


So come see "Urinetown - The Musical"! 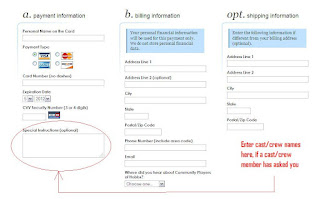 Posted by Robert Schumacher at 9:15 AM

What would it be like if a private corporation ran public toilets where you HAD to pay to use in order to take care of your private business? A glimpse into the seemingly endless search for a restroom for one young man who wants to be a law abiding citizen and tries very desperately to do so.

(No urination took place in the making of this video.)
Posted by Robert Schumacher at 8:24 AM

"URINETOWN - The Musical":   Make reservations today for the musical comedy "Urinetown" by going to www.communityplayersofhobbs.com. (Corporate sponsors, don't forget you can use your corporate sponsorships for free tickets to this event).

What is "Urinetown" about?  A comedy featuring a local cast and directed by Juston Harlin and part of the same team who brought you "Beauty and the Beast" last year, "Urinetown" is a hilarious tale of greed, corruption, love, and revolution in a time when water is worth its weight in gold. In a Gotham-like city, a terrible water shortage, caused by a 20-year drought, has led to a government-enforced ban on private toilets. Winner of several Tony awards, including Best Original Musical Score and Obie Awards, including Best Book and Lyrics, it has been performed regionally at such places as Baylor University and Texas Tech University. "Urinetown" catapults the “comedic romp” into the new millennium with its outrageous perspective, wickedly modern wit, and sustained ability to produce gales of unbridled laughter.

But isn't the title awful? Yes. Even the narrator of the show acknowledges it is an awful name for a show.

"Urinetown" will be June 7-9 at 8 p.m., June 10 at 2 p.m., June 14-16 at 8 p.m. and June 17 at 2 p.m. Tickets are $15.
(EDITOR'S NOTE:  There are some commercials available on our YouTube channel, with more to come!  And if a cast/crew member asks you to come to the show, please thank them by putting their name in the "Special Instructions" section when buying your tickets online, or telling the ticket sellers at the door if you buy your tickets in person.)

YOUTH WORKSHOP: Calling all youth from ages 9-18! Sign up today for the 2012 Summer Youth Performing Arts Workshop, where all the participants will be part of the musical production of Disney's "Aladdin Jr." The workshop starts in June and runs through performance nights of July 19-22.
Go to www.communityplayersofhobbs.com and download the PDF signup form and mail it to the Playhouse at P.O. Box 2153, Hobbs, NM 88241.

What is the workshop all about? Every participant learns about theater, learns how to move and act, learns singing and learns about costumes. This is a full production sure to please anyone curious about what it takes to put on the show. The show will be directed by Sandy Goad and Ronnie Gray as well as other certified teachers and theater experts.

Parents year after year have said how wonderful an experience this is for their children. Sign up today!

EMAIL BLASTS: We are now using a Google group system to send out the email blasts. Let us know if this is working for you. If you find someone is not getting an email, let us know so we can update our lists and check spam filters.

PERFORMANCE MICROPHONES: Thanks to the generous grant from the J.F Maddox Foundation, the Playhouse has been able to purchase 10 digital performance microphones that we will make use of in Urinetown. Thank you Maddox Foundation! We hope every "hears" the difference.

COSTUME ROOM: If you find the costume room little cozier or less like an oven, you can thank several people. First, Pat Cleer and Lasco for donating insulation and then URENCO USA Mechanical Maintenance and Pump Rebuild Shop volunteers came in on Saturday to put it up. There is still more to do with the insulation and Sandy Goad is still shuffling/sorting costumes and props but thanks so far it has made a difference. Help keep this room neat by picking up after yourself and putting things away when done!

Your "just filling in today with a reminder" past president,

Remember, the Playhouse has 75 years of history and the "community" in community theater means everyone, including you!
Posted by Robert Schumacher at 9:17 AM