"Fiddler on the Roof" cast and crew, we have a work call at the Playhouse on Sunday, 1/29/2012 from 2 PM to 4 PM.  I sent everyone an email with details.  Also, Saturday 2/4/2012 we will need a crew for moving additional seats and the cyclorama from USW to the Playhouse.  Details in email, see you there!  - Robert (Stage Manager)

Posted by Robert Schumacher at 8:46 PM

"Fiddler on the Roof" tickets are on sale now! 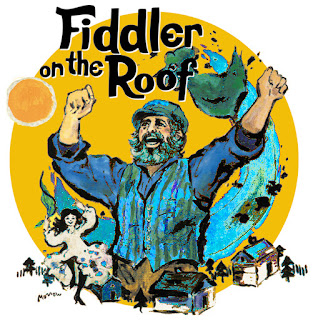 Tickets for "Fiddler on the Roof" are now on sale via our website.  Click the link for the Online Box Office.  Tickets are $15 for all seats (tickets purchased using a credit card include a nominal handling fee).  "Fiddler" will have reserved seating, so get your tickets now!  In-person sales will be announced at a later date.  Season tickets may be used for this show.

"Fiddler on the Roof" opens our 75th Anniversary Season.  Since 1937, the Community Players of Hobbs has been your venue for live theatre in Lea County.  Come out and celebrate 75 years of TRADITION with "Fiddler on the Roof"!
Posted by Robert Schumacher at 2:00 PM

The online box office has arrived!

The online box office is LIVE! We will have "Fiddler" seating and ticketing loaded in within the next week (there is nothing to "buy" as of right now), but this link is where you will go to purchase tickets online for Playhouse events!

Posted by Robert Schumacher at 2:46 PM

This post is IMPORTANT! Gala and online ticketing news!

Got your attention?  Good, please read on:

AWARDS GALA: The awards gala will be Friday, Feb. 3, at 7 p.m. Western Heritage Museum on the NMJC campus. Light hors d'oeuvres will be served. Mark your calendar now!

The awards gala is for EVERYONE and we need EVERYONE to attend.

Why?
First, this is when the Playhouse gives out its awards for the past season shows, scholarship winners, thanks people and gives its highest honor, the Tom Mason Award.

Second, this is when the Community Players of Hobbs votes in a new board of directors. I am term limited out and will not be able to serve again. Mary Lyle is also term limited out. The nominating committee — myself, Kim Hill and Glynese Floyd — have contacted several people about serving on the board and will present this slate of officers at the Gala to be voted on by you, the attendees. Sandy Goad has agreed to serve as board president. Everyone is allowed to vote on the new board.

Third, because it is a chance to get together to socialize rather than having to rehearse together or build something together.

Fifth, at least come and let me know what a horrible, despicable, loathsome job I've done over the last four years as president.  (Pathetic attempt on part to gain compliments but hey, I'll at least know you read this) I will continue to volunteer at the Playhouse and be a sounding board for Sandy, if she needs me. I have agreed to continue to serve on the IT Committee and the Building Committee, at Sandy's request.

TICKETING SYSTEM: Within a few days or a week, the Playhouse will be going online to sell tickets and make reservations. Yes, you read that correctly — we will be joining the world wide web, and be able to use credit cards!

We want to have it up and running by the time "Fiddler on the Roof" opens, so you can make reservations and pay for your ticket from the comfort of home in your PJs at midnight. (Note: Reservations online and with the credit card will require an additional, nominal handling charge.)

Q.  Will you still be able to purchase tickets at the door?
A.  Absolutely...if we are not already sold out.

Q.  Will you still be able to purchase tickets in advance using cash before the night of the show?
A.  We are working on this and have several options in the works. Cash, in advance, purchases will not require a handling charge. But the short answer is yes.

Q.  Will you provide personal assistance for people uncomfortable, unable or not interested in making reservations online?
A.  You bet. The online system is just another option for people.

Q.  How do I find the online reservation system?
A.  There will eventually be links to it from our home page, www.communityplayersofhobbs.com , etc.

I hope everyone appreciates how huge this step is for the community theater and thank you to Robert and the rest of the IT Committee for their work.
The IT Committee has several other important steps and projects to undertake but this is a big one to get up and running. Robert will have his hands full. Tee hee!

"FIDDLER ON THE ROOF": Don't forget "Fiddler on the Roof" opens in February. Rehearsals are well underway and there's lots of dancing! Show dates are Feb. 17-19 and 24-26.

Let me remind everyone that without corporate sponsors, there can be no community theater. So to our sponsors, thank you so much. Your gift is precious and much appreciated.

If you know of someone who would like to sponsor or purchase an ad in our Playbill (the booklet handed out at each show), please let me know. We need this support because tickets do not cover the entire cost of the community theater.

75 YEARS: Yes, the Community Players of Hobbs turns 75 this year. Our building, the Playhouse, is actually from the 1960s but prior to that there was a troupe of locals doing theater productions at various locations, including in Eunice. With the exception of a couple years during World War II, the Community Players or its forefathers have been presenting theatrical productions in Lea County.

Your "almost done and getting a little weepy about it" president, 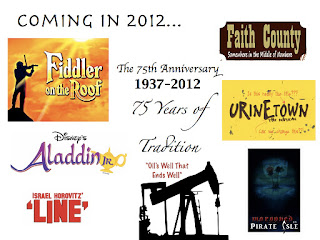 Posted by Robert Schumacher at 2:15 PM 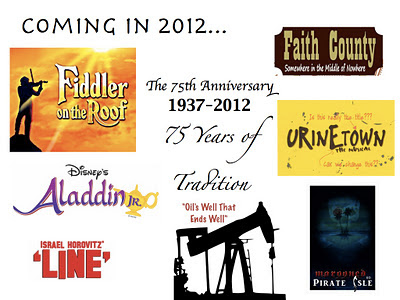 75 years...come out this season, see our shows.  The iconic "Fiddler on the Roof", the Southern comedy "Faith County", the hilarious "Urinetown", our Summer Youth Production of Disney's "Aladdin, Jr.", the melodrama "Oil's Well That End's Well", the off-Broadway powerhouse "Line", and our annual Haunted Pirate Adventure.  We have a great season in store for you at the Community Players of Hobbs!
Posted by Robert Schumacher at 2:37 PM

The Playhouse Board of Directors will meet on Monday, Jan. 16, at 7 p.m. at the Playhouse. The meeting last week was cancelled due to the weather.

We will have a Board of Directors' meeting at 7 p.m. Monday, Jan. 9, at the Hobbs Community Playhouse. Among the agenda items to discuss is a potential online ticketing purchasing system. Robert Schumacher has been leading a team on this. At the last board meeting, he was approved to head the IT Committee, which has several important issues to tackle. First up is online ticketing reservations. Go technology! Have any technology ideas, suggestions for the Playhouse, contact myself or Robert.

We'll also be setting the annual Awards Gala date and location. This is the annual general meeting where the new board is voted into office, etc., and awards are given out.

Don't forget, the rehearsals for the musical Fiddler on the Roof are in full swing. Look for the show in February.

Finally, the annual corporate campaign and advertising sales is underway with the Suzanne Holler making many of those calls. Thank you to all our corporate sponsors and Playbill advertisers. Without you, there would be no season. Thank you, thank you, thank you. Your sponsorship dollars are important to us. If you know of a company that would be interested in supporting the Community Players of Hobbs, please let me know.

Your "Short and sweet this time" president,

Remember, the Playhouse has 74 years of history and the "community" in community theater means everyone, including you!

Posted by Robert Schumacher at 5:31 PM

Please come to rehearsal at 6 PM on Wednesday and Thursday (1/11 and 1/12) if you possibly can, as we will be measuring everyone for costumes.  We want to do as many as possible from 6 to 7 PM on Wednesday, and catch the "stragglers" on Thursday.

Thank you in advance!  "Team Erin" (Erin Anderson and Erin Gibbs) will be doing the measuring (you may know them as "Golde" and "Yente").

Posted by Robert Schumacher at 12:31 AM

IMPORTANT: "Fiddler" rehearsal and Board Meeting CANCELLED for 1/9/12

The Center for the Arts of the Lea County Commission for the Arts is seeking an Executive Director.  Details can be found at their website, http://www.lcca.us/volunteer.html, or you can contact the Playhouse's own Larry Harlin, who is an LCCA board member.  If you can, please support our partner in the arts!

Posted by Robert Schumacher at 9:51 PM

"Fiddler on the Roof" cast, you have a dance rehearsal on Sunday, January 8th, 2012 at 2 PM.  The rehearsal will be at Maciolek School of Dance, 1849 North Jefferson Street, Hobbs, NM.
This is for the FULL CAST.
If you cannot make it, please call/text Robert at 808-497-9250 or email at subsailor@gmail.com.
To get to Maciolek from the Playhouse (you all know where that is, right?), take Grimes from the Playhouse to Bender.  Turn right on Bender, drive approximately 1.5 miles.  Turn right on North Jefferson Street, go approximately 1/2 mile.  Maciolek will be on your right, at the intersection of North Jefferson and East Jackson Streets.
Posted by Robert Schumacher at 9:00 PM

"Fiddler on the Roof" rehearsal reminder

Hope everyone had a Happy Holidays and is ready for 2012!
"Fiddler on the Roof" cast/crew, remember we start rehearsals again on Tuesday, January 3rd, 2012 at 7 PM at the Playhouse.  We will be rehearsing Tuesday through Friday this week, due to the New Year's holiday.  Come ready to sing!
Posted by Robert Schumacher at 10:00 AM