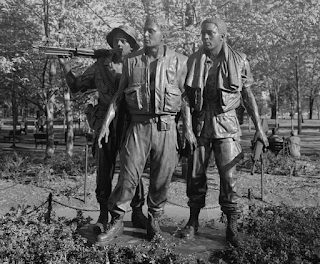 The Vietnam War spanned nearly 20 years, from late 1955 to the spring of 1975. The United States sent advisors and trainers in the latter half of the 1950's, and escalated troop levels throughout the early 1960's, and in 1965 began deploying combat units. The war became increasingly costly to U.S. forces, with the height of the war being the 1968 Tet offensive.

The U.S. committed over 500,000 troops at the height of it's involvement in the war. American casualties numbered nearly 60,000 dead and over 300,000 wounded. The war overall claimed nearly 4 million lives. And those who returned home from the war paid a very heavy price.

All told, some 3 million Americans served in Vietnam, over half of them in active combat operations. Sixty-one percent of casualties were aged 21 or younger. And over 800,000 suffered symptoms of post-traumatic stress disorder. Vietnam was arguably one of the most devastating wars in terms of it's effects on returning troops, with nearly a third of Vietnam veterans suffering from PTSD or PTSD symptoms. This made for extremely difficult reintegration when returning home, with a nation sharply divided over the war itself and families ill-equipped to handle the emotional toll the war took on them and the veterans returning to them.

Jeremy Collier served two tours in Vietnam. Like his fellow Vietnam veterans, he experienced brutal horrors in the field of combat. Now home from the war, he is spending his first Thanksgiving with the family in several years, yet Jeremy is a different man. Vietnam left a deep mark on Jeremy, one that is hard to understand and harder still to live with. Yet his mother Maruine and father Bob, as well as his younger sister Karen, do their best to try and understand what he has been through. For Jeremy, the hardest battle is the one after the war...

Posted by Robert Schumacher at 7:48 PM