The first two shows at the Hobbs Community Playhouse were a huge success. Here's a recap if you missed out on all the fun. 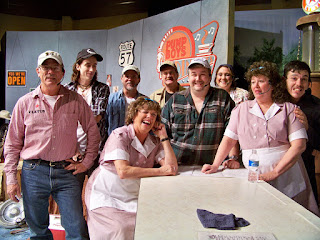 Pump Boys and Dinettes is a musical set in the south at a gas station with a diner next door and has been described as being "As refreshing as a cold beer after a bowl of 5 alarm chili." Directed by Glynese Floyd, the cast consisted of Tim Cummings, Brian Henning, Paul Hobbs, Kaine Munoz, Ronnie Gray, Mark Sanchez, Evan Witkowski, Sandy Goad, Helen Van Kleeck, and Erin Anderson. A live band, witty banter, and toe-tapping songs kept the audience entertained throughout the entire show...it also helped that during intermission pie and coffee were served in keeping with the "diner" theme. The entire cast and crew did a fantastic job making each night special for the audience. 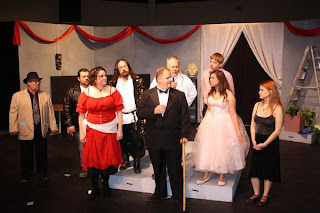 A Company of Wayward Saints follows a dysfunctional troupe of actors as they attempt to earn enough money to go home. Samantha Collins directed this commedia dell' arte style group consisting of Matt Blandin, Larry Harlin, Robert Schumacher, Brad Jett, Bill Raabe, Nick Keele, Briana Schneider, Erin Anderson, and Ash Baer. Throughout the play, the Company experienced feelings of arrogance and selfishness which eventually became feelings of acceptance and teamwork. The audience was treated to everything from slapstick comedy to deep philosophical moments contemplating the human condition. Once again, cast and crew presented an entertaining evening for audiences. A wonderful show.

Congratulations to the cast and crew of both shows!

Be sure to make plans to attend the upcoming show: Rabbit Hole directed by Nathan Miles.
Posted by Erin at 9:07 PM